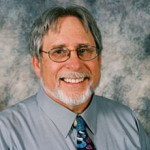 (:00)
Brandon Nys: Welcome to Safety Experts Talk. Visit our website at CreativeSafetySupply.com/podcast for links and transcripts.
(:08)
Introduction music
(:15)
Chuck Paulausky: How do you correlate the NFPA zero-to-four, with four being the worst with the GHS classification numbers where the lower the number, the worse it is.
(:25)
Dan Clark: New hazard communications labeling standards are coming June 1st, 2015. This means that chemicals must have a whole new labeling scheme. Some are confused and, in some cases, some are panicked.
Hello, I’m Dan Clark. Today we’re talking with Chuck Paulausky, President and principal consultant for CP Safety & Environmental. Chuck is a Certified Hazardous Materials Manager and an OSHA authorized outreach trainer, and we’re talking with Chuck from his office in Chandler, Arizona. Hello Chuck!
(:58)
Chuck: How are you doing today?
Dan: I’m doing well, thank you. So, this new hazardous communications labeling standard comes in June 1st, 2015. Should company owners and safety managers be panicked?
Chuck: Well, it depends on the situation. I think there’s a lot more pressure on the manufacturers of the chemicals to meet that June 1st deadline. For users of the chemicals, it’s a little different story because they were actually required to provide training on the new GHS labeling and safety data sheets for their employees as of December 1st, 2013. So, if they haven’t done that yet, then they’re kind of behind the eight ball.
(1:39)
Dan: They’re already out of compliance.
Chuck: Yeah, basically.
Dan: Exactly why are the standards changing? If you could review that, I know a lot of people in the industry understand what GHS is and all of that, but give us a thumbnail.
Chuck: Well, basically, the issue comes out of the history of hazardous communication. There’s been a lot of problems for manufacturers of chemicals who wanted to ship chemicals to Belgium or Japan or other countries. If those countries had specific requirements for labeling and for safety data sheets, there were restrictions placed on those manufacturing companies.
(2:18)
In Brazil,1992, there was a conference—a UN conference—they developed an international mandate to develop a harmonized system for classification, labeling and transport and for the safety data sheets. Out of this developed the Globally Harmonized System Of Classification And Labeling Of Chemicals. The short term for that is Globally Harmonized System—GHS. 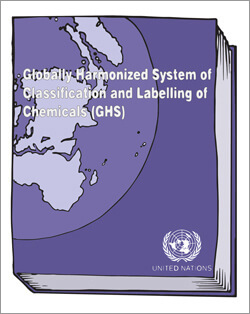 (17:49)
Chuck: Pretty much, pretty much.
Dan: Okay.
Chuck: Those pictograms come right out of the purple book, and each pictogram is connected to specific hazard classifications.
Dan: Mm-hm.
Chuck: It will also tell you what signal words might be required, what hazard statements, precautionary statements. All those things are linked to those hazard classifications.
For toxicity, the skull and cross bones—and we’re not talking ARRG, you know, as in pirates—it meets certain toxicity classifications under GHS.
(18:24)
Dan: Okay. Now, I see the exploding bomb in one of these. What does that mean?
Chuck: The exploding bomb is going to refer to, ah, obviously, exploding materials, ah, strongly reactive materials, certain hazard classes related to those categories in the classification.
Dan: Okay. Now, there are two diamonds that have flame. One is just a single flame, and then one is a flame over a circle.
Chuck: Right.
Dan: What’s the difference?
Chuck: Flammability is the flame.
(18:56)
Dan: Mm-hm.
Chuck: And the level of flammability depends on the flashpoint, primarily. The image with the flame and “O” is basically oxidizers. Chemicals that generate oxygen and can cause a fire to burn hotter and longer.
Dan: Okay. A full list of the images will be in the transcript of this podcast…
Chuck: Okay.
(19:18)
Dan: At creativesafetypublishing.com. And they can get a good view of those.
Chuck: Sure.
Dan: We’re getting close to the end here I do want you to give us a quick overview of what you do with CP Safety & Environmental.
Chuck: Okay. I’ve been doing safety and environmental since 1989. I worked quite a few years as environmental health and safety manager for a number of different companies. The last company, I was manager of facilities in, ah, let’s see, Arizona, Texas, California, Scotland, France, Singapore, and Taiwan.
Dan: Wow.
(19:53)
Chuck: Safety teams—I’m a big fan of safety teams—I couldn’t have done what I did for that company without them. For the last 12 years or so, I started my own company, and that’s, pretty much, what I’ve been doing. And, and very much the same thing. It’s just working as an outside consultant.
Dan: Keeping people safe.
Chuck: Anything environmental health and safety.
Dan: Well, it sounds like you’re a busy man, but I know that you do consult for private companies, so go ahead, if people want to get a hold of you, what’s your website?
(20:22)
Chuck: Ah, my website is CPsafety.net. And I’m located Chandler, but I currently have a client in Seattle right now, and I’ve had one for several years out in Houston, so I’m not afraid to travel.
Dan: Oh, that’s good. Well, I’m sure your family doesn’t appreciate that but, ah, it sounds like ah…
Chuck: Well, I don’t know, my wife, my wife seems to appreciate my time away.
Dan: (laughs) Well, I’m glad that you have a labor of love, ah, with this industry that you’ve chosen. Any final thoughts, Chuck, on hazardous communication and this June 1st, 2015 labeling deadline?
(20:55)
Chuck: Yeah, it’s ah, you know, as far as those deadlines, I should mention the employees were required to be trained on the new systems by December 1st, 2013, so if you haven’t done that you should to get on the stick on that one.
Dan: Mm-hm.
Chuck: By June 1st, 2016, companies are required to have their workplace labels updated, the HazCom program updated, completed all training. So, you’ve got a little bit of time there.
(21:23)
It’s for the manufacturers that that June 1st, 2015 deadline applies. And they’re required by that date to comply with all provisions of rule, except that they can continue to ship under the old system until December 1st, 2015. So, there’s some leeway there. So, manufacturers, you should be requiring from your suppliers GHS compliant labeling and safety data sheets no later than 2015. And then you’ve got a little bit of time to get your program together, but I wouldn’t waste any time. I’d get on it now because your employees probably already have been seeing safety data sheets that are GHS compliant, and if you haven’t done the training, they may not get it.
(22:08)
Dan: What I’ll do is, in the transcript of this podcast, I will put the links to the actual deadline dates that you just rolled out. About June 1st, 2015; ah, June 1st, 2016 and the previous deadlines and what’s required.
Chuck: Right. And if anybody needs any help, just have them give me a call.
Dan: Okay, that’s great. Well, Chuck, ah, we really appreciate you being on the podcast today. Thanks very much.
Chuck: I appreciate the opportunity.
Dan: Our guest has been Chuck Paulausky, President and principal consultant for CP Safety & Environmental in Chandler, Arizona. Thanks for joining us I’m Dan Clark.
(22:45)
(Outro Music with Voiceover)
Brandon: Thank you for joining us on Safety Experts Talk. If you have suggestions for future podcasts, send them to podcast@creativesafetysupply.com. For more safety experts talking about safety news, OSHA regulations, PPE, lean, 5S, or Continuous Improvement, go to CreativeSafetySupply.com/podcast.
(23:17)
END
chemical drums image © ℗ 2010 Geoffrey Whiteway; © 2005-2013 freerangestock.com. All Rights Reserved.
Sounds provided by www.freesfx.co.uk