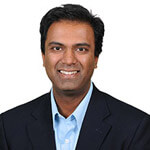 Fine metal or organic particles can burst into flames. Dust explosions can happen in a confined space without notice. Hear dust and flammability expert Dr. Ashok Dastidar discuss a Go/No-Go test, and how to collect a sample of dust in your facility.
Dr. Dastidar warns that dust which comes from something that isn’t normally flammable can actually explode. For example, a steel rod may not burn. But, if you make very fine steel powder, the increased surface area allows it to burn rapidly. In other words, explode.
Dr. Dastidar is Vice President of Dust and Flammability Testing for Fauske & Associates in Burr Ridge IL.
ASTM test referenced: E1226; NFPA documents referenced: 61, 499, 654, 664.

(:00)
Brandon Nys: Welcome to Safety Experts Talk. Visit our website at CreativeSafetySupply.com/podcast.
(:06)
Introduction music
(:15)
Dr. Ashok Dastidar: Whenever you have a fire that includes dust, that was probably near miss for a dust explosion.
(:19)
Dan Clark: Do you have explosive dust? Do you have too much explosive dust? And how much is too much? Hello, I’m Dan Clark. Today we’re talking with Dr. Ashok Dastidar, Vice President of Dust and Flammability Testing for Fauske & Associates in Burr Ridge IL. Hello, Dr. Dastidar. How are you?
(:39)
Dr. Ashok Dastidar: Good, good. How are you?
(:41)
Dan: I’m well. We saw your article about Combustible Dust Basics on, ah, OHSonline.com.
(:48)
Dr. Dastidar: Sure.
(:49)
Dan: By some industries have combustible dust and don’t even realize it. Is that right?
(:53)
Dr. Dastidar: Wow, that’s very correct. We all realize that flammable gases or vapors are present, for example, methane gas or propane gas, but we really don’t realize that simple things like coffee or sugar, fine metal powders like aluminum can also explode.
(1:08)
Dan: So, if a business is creating some kind of dust, and it’s up on the rafters, the ceiling ducting, on the equipment and somehow it might shake loose and suspends in the air, then it might explode.
(1:21)
Dr. Dastidar: That is correct. You actually need five things for an explosion to occur. You need to have a fuel, which would be your dust in question. You need to have oxygen, which will be the oxygen from the air. You need to have some sort of ignition source, which could be a flame, it could be a spark from an electric motor, it could be frictional sparking, or just a hotspot in piping or process equipment. And then you need to have some sort of confinement. Building walls could be confinement. A piece of operating equipment that you’re using, for example, a blender, or a dryer, or a mill, or ah, even just a dust collector could be a type of confinement. And then you need to have the dust suspended in the air somehow, which could be, for example, that shaking that causes the powder to fall off a high ledge, like a light source, or something. And when all those things combine together, you have the possibility of a dust explosion.
(2:08)
Dan: And, and I found this surprising. Many times, dust that comes from something that isn’t normally flammable can explode.
(2:16)
Dr. Dastidar: Yes, it really depends on the surface area. For example, a steel rod may not burn. But, however, if you make very fine steel powder, you could get that material to explode because of the extended surface area.
(2:29)
Dan: So, how does an employer or manager know that they’re at risk for a dust explosion?
(2:37)
Dr. Dastidar: Ah, typically, you know, most organic materials will explode. Most inorganic metals will explode, and there’s some inorganic salts that could also explode. But, ideally, besides the fundamental idea of organics exploding, the best way is to perform some sort of explosively screening test.
(2:54)
Dan: Mm-hm.
(2:55)
Dr. Dastidar: A Go/No-Go. Ah, actual, practical experiments are probably the best way to ascertain whether material explodes or not.
(3:03)
Dan: Now, is a this a, ah, do-it-yourself test? I know that you are in the business of doing this. Your company does this type of thing, but is it something that where you have to have a pro come in, or is it something that just, uh, an average Joe can do?
(3:15)
Dr. Dastidar: Well, you know, their are, their are safety concerns when you do this because you’re dealing with flames and fire, so maybe if you’re not well versed or well experienced doing this kind of thing, it shouldn’t be something you do on your own.
(3:26)
Ah, it is a standard ASTM test. At ASTM they have an E1226—they have a method for this explosibility screening. It’s probably better left to do the test according to ASTM because you’re using a fairly large pyrotechnic source—like a very large firecracker—to set off the explosion to see whether it would ignite or not. It’s unadvisable, but if you wanted to look at it in the home, there are people that will do demonstrations on YouTube where they take, or actually, I saw it on MythBusters where they actually dispersed some material, coffee creamer, and ignited it with a flame. That’s a very crude method, and may not encompass all scenarios, and I wouldn’t really recommend to the novice to try that.
(4:07) 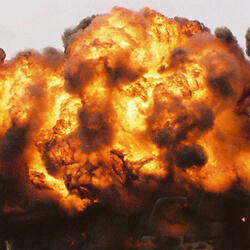