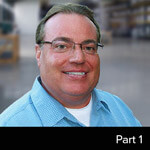 Chuck Hardy, Quality Control Dir. at NMEDA, shares his story of being a Six Sigma Black Belt. Chuck also tells about current position as Quality Control Director at non-profit NMEDA (The National Mobility Equipment Dealers Association). He compare it to previous positions in manufacturing at Eastman Kodak and Lockheed Martin. In this part 1 of two podcasts, Mr. Hardy offers great tips on beginning a lean or Six Sigma program. Scroll down in the transcript to see the links.
Listen to Part 2 » 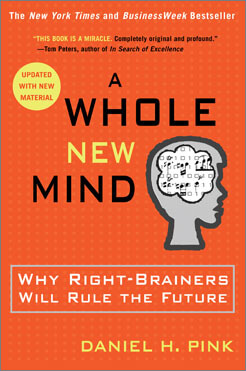 Primarily these are logical, therefore they’re left brain concepts. So where I see the next breakthrough is bringing the right side of the brain into the equation – that’s the creative part of it. The creating continuous improvement models that embrace intuition and creative imagination.
Interestingly, there’s already work taking place in this arena and some of that work is being done, I don’t know if you’ve heard of Daniel Pink, he’s author of “A Whole New Mind”, which is a fantastic book, and he says why right brain thinkers will rule the future, and I, for one, think he might be on to something.
(15:59)
Here’s an example: We’ve all heard about Apollo 13, their amazing return to Earth safely. They were stuck out, all their systems down, pretty much. All of the systems that they were intending to rely on to bring them back to Earth were not there anymore. They basically lost their roadmap. But yet they were able to accomplish this incredible feat to bring themselves back to the earth safely. And how do they do that? They had to rely on quick thinking. They had to rely on intuition, imagination. Now what are these things? These are right brain characteristics.
(16:38)
So, it’s something that I see on the horizon. It’s bringing in that right brain thinking. There’s a few companies out there that are working on it. Daniel Pink’s done a lot of work, there’s some others out there that are putting models out for transformation. And one of the models that I’ve seen recently is called Creo. Creo is being developed by a company called Optimal Transformation Group, and its Latin. Creo is Latin for “to create or make.” This model, that uses a process called “symphonization.” That’s another new term that’s being put out. And I think it’s revolutionary.
(17:18)
The Creo model includes RECOGNIZE, IDEATE, VISUALIZE, CREATE and then IDEALIZE the problem. As you can see, it’s a departure from the DMIAC—define, measure, analyze, approve, control. While it still follows a model, it’s something that uses a different type of thinking. If you haven’t heard of it yet you’re not alone. Albert Einstein—I think you heard of this guy, he’s is a little bit smarter than me—he says “We cannot solve our problems with the same thinking we used to create them.” And that’s what I’m excited about because solving our problems in a different way is what’s on the horizon. It’s an exciting time actually to be in this environment.
(18:08)
Brandon: Now, there are some critics out there on the internet and in publications of lean and Six Sigma and, with Six Sigma most notably, some of them say that it’s a fad and that it’s fading. What are your opinions on that?
Chuck: Fading, I don’t know… Unpopular, unfortunately there has been some pushback and I’ve seen people in different communication environments that are pushing back a little bit and questioning lean / Six Sigma, if its time is over.
(18:37)
But if you look at lean / Six Sigma, maybe it is reaching a point of where it needs to evolve again, but I don’t see that any different than continuous improvement, what the foundation of lean / Six Sigma is all about. So I think it’s a good thing.
One thing to remember is that the programs and the practice does not need to be rigid. Lean is meant to be flexible and it’s not a one-size-fits-all, So, I’m not buying in that it’s faded. I think maybe it needs to evolve but, we can talk about that too.
(19:16)
Brandon: So, when companies do experience push back in their lean and Six Sigma efforts, where does that push back come from?
Chuck: What I’ve seen as far as a push back standpoint, is some people saying well is lean / Six Sigma done? Is this the end? It is more coming from some failures that have occurred in the industry. People looking at lean and saying “Well, it’s not working.” But that’s not true and my opinion, if lean is practiced in the way that it’s intended, it really cannot fail.
(19:50)
Brandon: It’s evident that there are some companies that are implementing lean and Six Sigma, and the program does fail. So, when it does fail, do you think that’s just because these companies have lost focus on the goal?
Chuck: Well, one of the things, actually, one of the biggest areas where I’ve seen failures occur—and they do occur—is there’s not a top-to-bottom embracing of the philosophy.
(20:15)
I would say one of the most difficult things for a manager, especially a middle manager in, say, a larger organizations that’s going on a lean journey, is they need to give up a lot of their responsibilities to the workforce. Because, in a lean environment, in a lean / Six Sigma environment, the workers are the ones that are really managing the process. They’re the ones that are identifying continuous improvement opportunities. They’re the ones responsible for implementation.
(20:52)
So, it takes a lot of the responsibilities that those managers once had, and shifts it to the workforce. So, I’ve seen companies that there’s a lot of anxiety in the middle management area that, well, they have this power and now they’re losing that power. And it’s hard for them to do. So typically that’s the cause of it, is just not being supported throughout the organization.
(21:21)
Brandon: Alright, everyone. This podcast is running a little bit long, so we are going to split it up into two sections. I’m Brandon Nys. Be sure to come back and listen to part two of our lean / Six Sigma discussion with Chuck Hardy from NMEDA.
(21:36)
(Outro Music with Voiceover)
Brandon: Thank you for joining us on Safety Experts Talk. If you have suggestions for future podcasts, send them to podcast@creativesafetysupply.com.
For more safety experts talking about safety news, OSHA regulations, PPE, lean, 5S, or Continuous Improvement, go to CreativeSafetySupply.com/podcast.
(22:08)
END