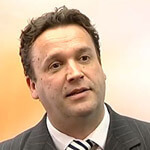 Is it safe to eat food you dropped on the floor in the employee lunchroom? Prof. Anthony Hilton, head of Biology and Biomedical Sciences at Aston University, Birmingham, England, reveals the results of his microbiology study.
Prof. Hilton’s students tested microbial survival on indoor flooring surfaces, and found it is safe to eat food dropped on a floor which is cleaned on a regular basis. The study is not about food dropped outside in dirt near a campfire. Prof. Hilton makes it clear in this interview that the study only included food dropped on indoor surfaces, including vinyl and carpet.
Dan Clark conducts this interview with the sometimes serious, sometimes funny Prof. Hilton

Prof. Anthony Hilton – Aston University
Scientists Prove The Five-Second Food Rule Does Exist
(:00)
Brandon Nys: Welcome to Safety Experts Talk. Visit our website at CreativeSafetySupply.com/podcast for links and transcripts.
(:08)
Introduction music
(:16)
Dan Clark: I’ll admit it. I’m guilty of eating food off the floor. And I think I’ve finally been justified. Let’s talk with Prof. Anthony Hilton at Aston University in Birmingham, England. Hi, Professor.
(:27)
Prof. Anthony Hilton: Hello, and thank you.
Dan: Professor, I’m a typical American male, and I eat food off the floor.
Prof. Hilton: (laughter).
Dan: Am I safe? Tell us about your Five Second Rule study.
Dan: Please tell us about your study and maybe how it might affect the average worker.
Prof. Hilton: Well, some of the students that I was working with introduced me to this idea of the Five Second Rule which is: if you drop food on the floor that if you pick it up within a period of five seconds then maybe fewer bacteria will have got onto it than if you leave it for longer. What we did is dropped food onto the floor.
(1:00)
Dan: Mm-hm.
Prof. Hilton: We looked at how many organisms had made the transfer from the floor at three seconds, which is under the Five Second Rule, and at 30 seconds, which is obviously after the Five Second Rule.
Dan: Uh-huh. And, what was the result? Did the bacteria pull out stopwatches and respect this Five Second Rule?
Prof. Hilton: Well, the initial impact of the food on the floor does transfer a number of microorganisms. But what we found, which others have not really looked at further, is that the longer that food stays on the floor, the actual more bacteria accumulate.
(1:39) 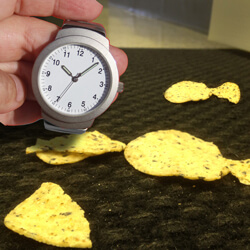