A sudden cardiac arrest is one of the leading causes of deaths in the U.S. Each year, over 350,000 people will experience a cardiac rest. The scary thing is they can happen to anyone, at anytime, without notice. As of now, the only effective treatment for restoring regular heart rhythm during a sudden cardiac arrest is an automated external defibrillators (AED). It’s an easy to use device that actually requires no medical background to use, however does require some training to use properly. 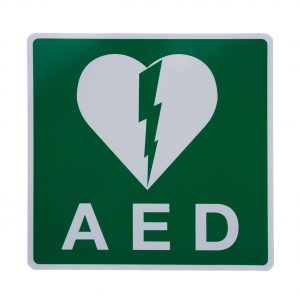 What is an AED?

An AED is a portable electronic device that can automatically diagnose life threatening cardiac arrhythmias of ventricular fibrillation and ventricular tachycardia in a person. The device can then treat the patient through what’s called defibrillation, which is the application of electrical therapy that stops the arrhythmia, allowing the heart to begin to reestablish an effective rhythm.

While reports have surfaced about sixth graders using an AED within 90 seconds of ever seeing one, it is recommended that you receive the proper training on one before using it.

The American Red Cross strongly believes that with improved training and access to AEDs, we could save 50,000 lives each year. They state that all American should be within four minutes of an AED and someone trained to use it.

Why four minutes? Time is certainly of the essence when a cardiac arrest occurs. Here are some facts provided by the American Red Cross to support their claim:

OSHA believes that AEDs are an important part of workplace safety. In 2001 and 2002, there were 6628 workplace fatalities that were reported to OSHA. Of those, 1216 were from a heart attack, 354 from electric shock, and 267 from asphyxia. OSHA believes that up  to 60% of these deaths could have been prevented if an AED was immediately available for use and a trained individual was there to use it.

Although OSHA does not currently have an specific standards in place that address AEDs, they strongly recommend each workplace has one and the proper training for using an AED.

There is a popular myth that claims if you are wearing an underwire bra while getting a heart-starting shock from an AED, your bra could catch on fire and the electricity from the AED could potentially arc to the underwire of your bra, frying your skin in the process.

The show MythBusters, decided to put this theory to the test on one of their episodes. During their test the bra did not burst into flames. They claimed that for that to happen, sparks would have to land on the fabric and burn unchecked, which is highly unlikely when you have someone there who is alert and using the machine. The MythBusters did find however, that an AED could transfer electricity to a bra’s metal underwire to the skin. For this to happen, they did note that a lot of things would have to go wrong. The paddles would have to be placed in the wrong spot and the metal from the bra would have to be partially exposed to act as a conductor.

Although the chances of getting burned may be slim, it is recommended that not only should you remove underwire bras before using an AED, but any piercings on the torso should be removed as well.

Although an AED may be easy to use, when it comes to saving one’s life, every second matters. Which is why the proper AED training is so important. The American Red Cross offers several training seminars across the U.S.

Here are a couple success stories that were shared by the American Red Cross: